To provide an environment for players of all levels and ages to play and learn the game of futsal, the fastest growing form of indoor soccer in the world!!  The premier futsal league of Northern Indiana.

Founded in 2010 to develop players and keep their skills sharp in the off season, Fort Wayne Futsal has continued to grow offering competitive male and female divisions ranging from youth, high school, college and adult.

As a member of U.S. Youth Futsal and the only U.S. Soccer approved futsal league in Indiana, Fort Wayne Futsal offers opportunities for all players to experience the passion of futsal at an affordable price.

Due to our most recent partnership with SportONE Parkview Fieldhouse, a 82,000 sq ft state of the art indoor facility with 8 futsal courts, we are expanding our capacity for more players to participate including year round soccer development programs, camps and clinics.

Every team participating will have an opportunity to compete at the Midwest Regional Futsal Tournament in January. The Regional is a qualifier for the National tournament. The tournament has grown to 150 teams in 2018. 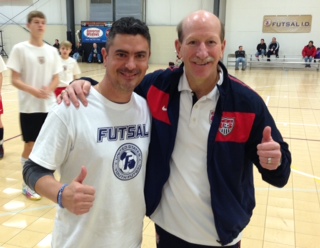