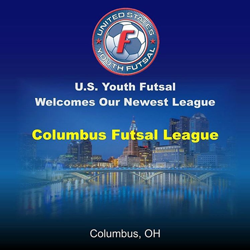 Columbus’ League features divisions in every age, gender, and skill level from U8 to adult. With high-quality officiating, fair and balanced competition, great facilities and outstanding service we hope to keep coaches, players and parents involved year after year.

Futsal is the fastest growing sport in North America and we are dedicated to the growth of the sport here in Central Ohio. Over 450 youth athletes representing 14 different soccer clubs, countless parents, mentors, and referees helped to make it all possible in our first season. The result...happy kids and happy coaches enjoying the global game and impacting lives. Keep it up, Columbus! #PLAYCFL

Columbus Futsal & Street Soccer Academy provides youth development and free play for boys and girls in the central Ohio area. In 2017, 5 players from CFA were selected to the USYFNT for international matches in Costa Rica and Canada. The 2008 boys team, CF Flyers, are the 2017 USYF Great Lakes Regional Champions.

Our goal at Columbus Futsal is to build a positive futsal culture in our city, provide safe places to play, and promote futsal in its purest form while keeping kids healthy, happy, and active,  giving them the opportunities to play at the highest level. To learn more about the Columbus Futsal organization, visit us at columbusfutsal.us

To provide an environment for players of all levels and ages to play and learn the game of futsal.  The Columbus Futsal League will do this by:

MOST BALANCED FUTSAL COMPETITION IN THE COLUMBUS AREA

Columbus Futsal is the only futsal league in Central Ohio sanctioned by USYF/USAF, affiliated with US Soccer. We employ only US Soccer futsal certified referees for our games. CFL is the only league that provides 2 referees for U13 and older teams. We think it is critical that the older age groups have 2 experienced officials to call the game properly.